Swope Health is recognizing the struggle for women’s equity as well the contributions of women during March, Women’s History month as designated by presidential proclamation.

Join us for a free online series of conversations featuring women sharing their remarkable experiences. Replays of all conversations are now available: 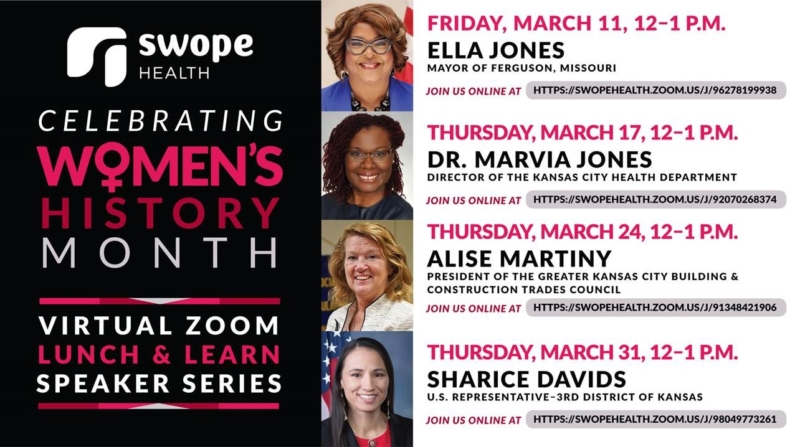 Rep. Davids was raised by a single mother who served in the Army for 20 years. After graduating from Leavenworth High School, she worked her way through Johnson County Community College and the University of Missouri-Kansas City before earning a law degree from Cornell Law School.

As a first generation college student who worked the entire time she was in college, Rep. Davids understands the importance of quality public schools and affordable higher education. It is that foundation that allowed her to go on to a successful career, focused on economic and community development, which included time as a White House Fellow under President Barack Obama.

When she was sworn into the 116th Congress, Rep. Davids became one of the first two Native American women to serve in Congress. Rep. Davids has centered her work in office on putting Kansans first, fighting to limit the influence of special interests and make health care more affordable and accessible to everyone. She is a resident of Roeland Park.

Jones is the first Black woman Mayor of Ferguson. She was elected in 2020, in the first election following the 2014 fatal police shooting of Michael Brown and subsequent unrest in Ferguson. She stepped into the leadership role in the midst of the pandemic, and at the time, she described her mission as one of bringing about change through inclusion and transparency.

Jones, a Ferguson resident for more than 40 years, previously worked as a high-pressure liquid chromatographer certified by the American Chemical Society. She worked at Washington University School of Medicine, Biochemistry Molecular Biophysics department, and at KV Pharmaceutical as an analytical chemist.

She previously served on the Ferguson City Council and is a Pastor in the African Methodist Episcopal Church. She serves the community on the boards of the Emerson YMCA and St. Louis MetroMarket. She also is the founder and chair of Community Forward Inc., a nonprofit community development organization.