The Swope Health annual trick-or-treat event will once again move outdoors with a drive-through version of Treat Town.

This is our 27th year of Treat Town, a special Halloween trick-or-treat event for kids. Like we have done the last two years, this event is modified to accommodate COVID-19 precautions.

Participants will drive through a large and spooky tent in the parking lot at Swope Health Central from 6 to 8 pm Saturday, Oct. 29. 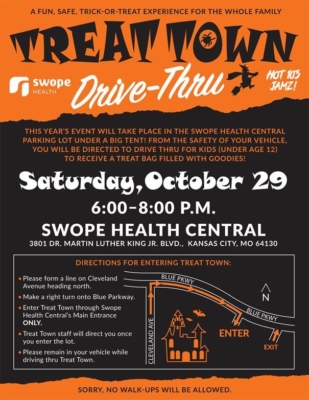 From the safety of your vehicle, you will be guided to tent where we (along with assorted ghouls, superheroes and other creatures) will provide treat bags for children under age 12.

We encourage all participants to wear a face mask to protect yourself and others from COVID-19. Everyone stays in the car with just a quick stop to gather your treats! (No walk ups, please.)

Swope Health will be in the community providing free COVID-19 testing, vaccinations and free food giveaways. Please plan on joining us: 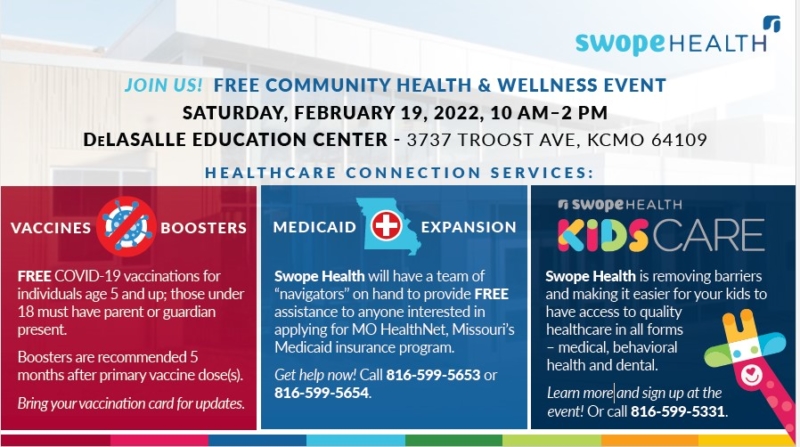 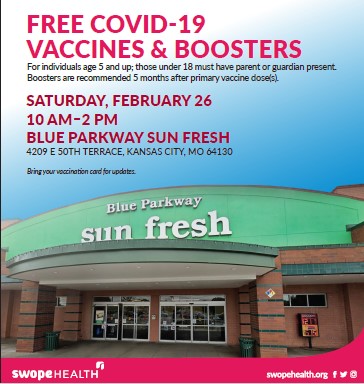 All events are free, online and open to all. Please plan on joining us. 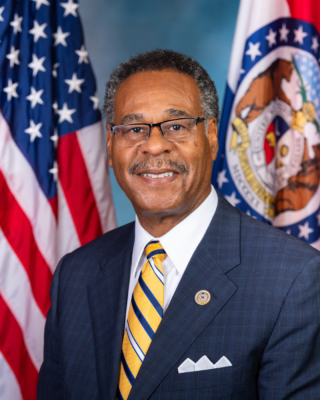 During his eight-year stint in the Office of the Mayor, Cleaver distinguished himself as an economic development activist and an unapologetic redevelopment craftsman. He and the City Council brought a number of major corporations to the city, including TransAmerica, Harley Davidson, and Citi Corp. Cleaver also led the effort, after a forty-year delay, to build the South Midtown Roadway. Upon completion of this major thoroughfare, he proposed a new name: The Bruce R. Watkins Roadway. Additionally, his municipal stewardship includes the 18th and Vine Redevelopment, a new American Royal, the establishment of a Family Division of the Municipal Court, and the reconstruction and beautification of Brush Creek.

Cleaver has received five honorary Doctoral Degrees augmented by a bachelor’s degree from Prairie View A&M, and a master’s from St. Paul’s School of Theology of Kansas City.

In 2009, Cleaver, with a multitude of accomplishments both locally and Congressionally, introduced the most ambitious project of his political career—the creation of a Green Impact Zone. This zone, consisting of 150 blocks of declining urban core, has received approximately $125 million dollars in American Recovery and Reinvestment funds. The Green Impact Zone is aimed at making this high crime area the environmentally greenest piece of urban geography in the world. This project includes rebuilding Troost Avenue, rehabbing bridges, curbs and sidewalks, home weatherization, smart grid technology in hundreds of homes, and most importantly, hundreds of badly needed jobs for Green Zone residents.

Cleaver, a native of Texas, is married to the former Dianne Donaldson. They have made Kansas City home for themselves and their four children, and grandchildren. 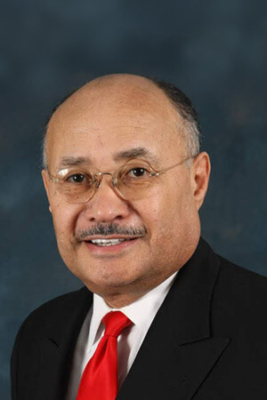 Frank Ellis, founder of Swope Health. Frank Ellis served as founder, chairman and CEO of Swope Health Services. Originally named Model Cities Health Corporation, Swope Health Services opened in 1969 in the basement of Metropolitan Baptist Church in Kansas City. He and his dedicated board saw the need to provide primary health services to those who fell through the cracks of the health care system – the working poor.

That first year, with a budget of $100,000 and 20 employees, 2000 patients were served. As a true nonprofit entrepreneur, Mr. Ellis grew the organization and founded FirstGuard Health Plan in 1996. He grew the company after an initial $5 million in raised equity to more than $250 million in revenue and later sold it to Centene Corporation for $123 million in 2004.

During his 42 years as head of Swope Community Enterprises, Ellis has received local and national recognition for his impact as a nonprofit entrepreneur—effectively applying business principles and practices to address the total health and economic well-being of the indigent and working poor. He served as the Chairman of the Greater Kansas City Chamber of Commerce, where he was leading the efforts on the Chamber’s Big 5 Ideas to create a better business climate, create jobs, and to make Kansas City the most entrepreneurial city in the world. Kendrick is responsible for the museum’s day-to-day operations and the development and implementation of strategies to advance the mission of the 501 c3, not-for-profit organization. Since 2011, he has helped orchestrate a nearly $20 million turnaround that has helped the NLBM regain its vitality and financial stability.

Kendrick was responsible for the creation of several signature museum educational programs and events including the Hall of Game, which annually honors former Major League Baseball greats who played the game in the spirit and signature style of the Negro Leagues.

And while he doesn’t fashion himself to be a historian, Kendrick has become one of the leading authorities on the topic of Negro Leagues Baseball history and its connection to issues relating to sports, race and diversity. He has been a contributing writer for “Ebony Magazine” and the national Urban League’s “Opportunity Magazine.” 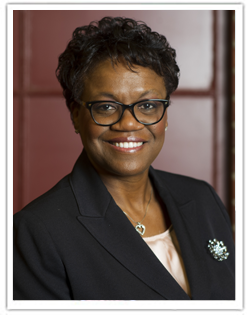 As the first African-American leader in the 105-year history of Metropolitan Community College, and the only African-American CEO in the Missouri community college system, “I live and walk in the truth of who I am each day,” Dr. Beatty says. 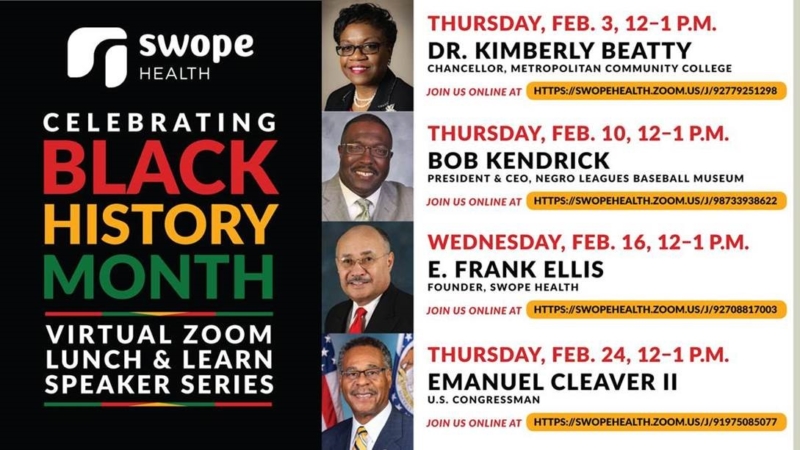 Vaccinations available, no appointment necessary, for age 5 and up (individuals under 18 must have guardian or parent present). 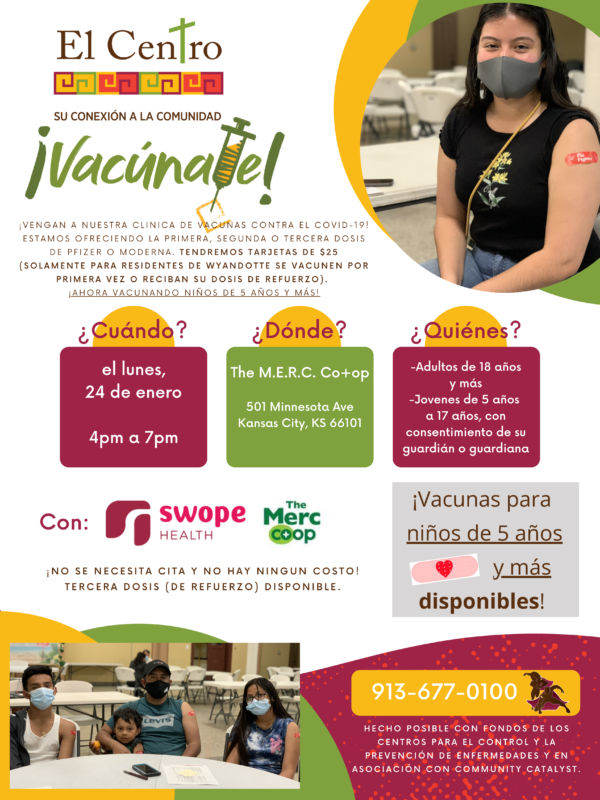 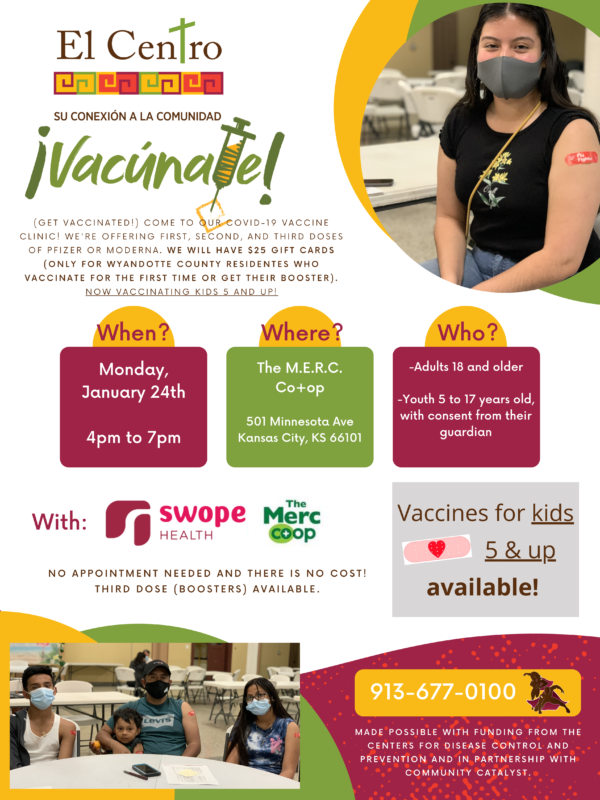 We will announce the rescheduled date as soon as it is available. 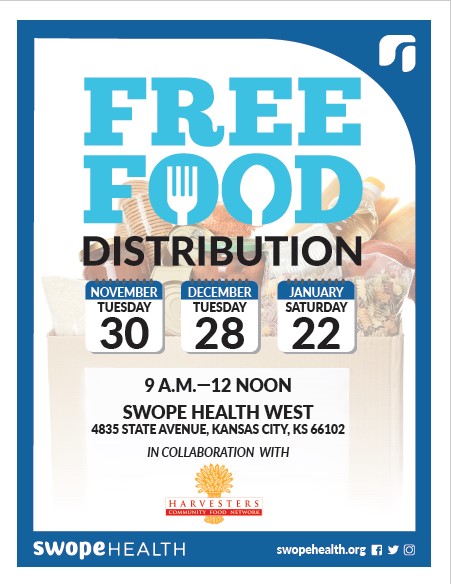 Swope Health will host a free public webinar on “Race and Ethnicity in the LatinX Community” at noon, Wednesday, Oct. 6.

To participate, join by Zoom: https://swopehealth.zoom.us/j/95970403008?pwd=dDZwL2orZS9iMkVaamVzVXFyTWRMdz09 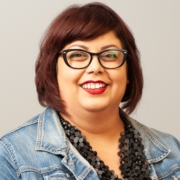 Erica Andrade is the proud daughter of an immigrant mother and has called Kansas City, Kansas, her home for more than 27 years.

Ms. Andrade joined El Centro, a nonprofit that serves the Latino community in Wyandotte and Johnson Counties in 2001. El Centro’s mission is to improve the lives of Latinos and others through educational, social and economic opportunities.

Erica Andrade on Race and Ethnicity in the LatinX community
https://swopehealth.zoom.us/j/95970403008?pwd=dDZwL2orZS9iMkVaamVzVXFyTWRMdz09 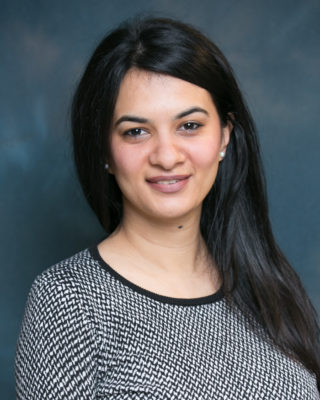 The town hall, sponsored by 107.3 FM, will be broadcast live on Facebook. Watch on the 107-3 FACEBOOK PAGE

The Town Hall, “The Real Deal on the COVID-19 Vaccine,” features other Kansas City healthcare experts with Dr. Jamal in questions and discussion led by Darron Story of 107.3FM.

Dr. Jamal heads the Department of Quality and Population Health at Swope Health. She is responsible for organization wide clinical quality, performance and process improvement, along with Population Health initiatives geared toward meeting the quadruple aim of improving provider and patient experience, improving population health outcomes and resource stewardship.

She also practices as a primary care physician through the Independence clinic and sees a variety of complex medical diagnoses.

Dr. Jamal is on faculty at University of Missouri/Kansas City where she is responsible for developing and delivering a preventive medicine and public health curriculum for family medicine residents. She is also responsible for the didactic lecture series Social and Structural Determinants of Health at the UMKC School of Medicine for Medical Students.

National Health Center Week, which takes place each year to spotlight the valuable work and accomplishments of America’s health centers, is set for Aug. 9-13. Swope Health will celebrate with its own events and special days of focus.

Swope Health will mark the week by honoring the people we serve and showing appreciation for the numerous individuals and groups who are so instrumental in helping us carry out our mission:

National Health Center Week has been observed for more than 30 years in acknowledgement of health centers as a beacon of strength, service and care in their communities. Swope Health is proud to fill that role in Kansas City with the assistance of many supporters. The events of the week shine a light on our stake in community health, paving the way to meeting our patients’ needs and driving a more equitable healthcare system for all.

“This week is always a special one at Swope Health because it accentuates our critical role in caring for the people in our community who need it most,” said Jeron Ravin, JD, Swope Health President and CEO. “As part of our mission to provide accessible, quality healthcare in Greater Kansas City, we will build upon these opportunities to share our story so we can encourage greater collaboration and take meaningful steps toward lasting change.”

Ravin added: “National Health Center Week also prompts us to express our heartfelt gratitude to everyone who contributes to the work we do – our staff members who make Swope Health so indispensable; our donors, stakeholders and partners who have joined our commitment to making care visible; and all our patients, who are such a joy to serve. We look forward to a week of well-deserved celebration and recognition, while maintaining our focus on a brighter future for health in Kansas City.” 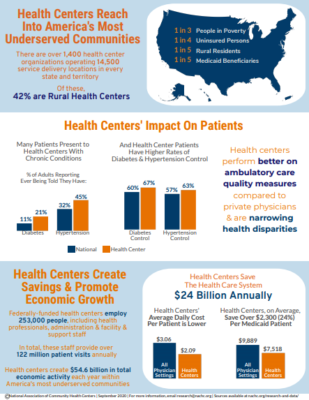 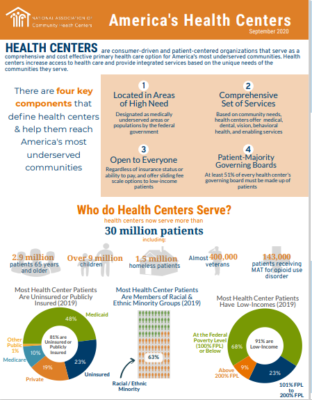 The event, sponsored by Swope Health with El Centro Inc. and KCK PAL, runs from 5:30-7:30 p.m. at the PAL center, 800 N 5th St. No appointments are necessary, and the event is open to the community.

The Pfizer vaccine will be offered to individuals age 12 and up. Anyone under age 18 must have a parent or guardian present. Participants will be offered giveaways and the chance to enter a raffle for grocery gift cards.

The Police Athletic League of KCK offers youth the opportunity to interact with police officers in a positive setting while participating in academic, cultural, mentoring and sports programs. The program provides a safe, caring, and supportive environment, where members of the Kansas City Kansas Police Department and citizens work together to facilitate a community free from fear and violence.

Swope Health is hosting a free webinar, open to all, to learn about how you can help combat the crisis of sex trafficking of minors in our community. 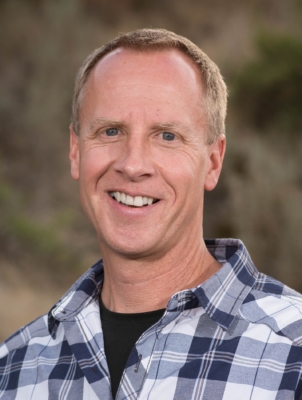 The event features Russ Tuttle, the president and founder of The Stop Trafficking Project®– a non-profit organization dedicated to raising awareness of the issue, and teaching ways to prevent trafficking. The organization has developed the “Be Alert” strategy, which empowers students and encourages adults to take effective and empathetic action.

Russ’s program, “More than meets the eye,” will include details about the reality of domestic minor sex trafficking in our community and offer specific tactics to empower individuals to make a difference.

“Technology is not the enemy,” Russ says. “But the reality is that our kids’ vulnerabilities can — and are – being exploited online.”

His program will describe worst-case scenarios that led to instances of criminal sex trafficking involving children. He explains the scenarios as the “exploitation of vulnerability,” giving webinar participants an understanding of how the process typically begins. He also offers practical tools for adults to understand how to intervene in a compassionate and caring way.

Russ, with more than three decades of experience, has delivered educational presentations throughout the region, frequently speaking to students, educators, health professionals and parents. He estimates he has reached 125,000 people through his passionate commitment to raise awareness and help prevent exploitation of minors.

Swope Health provides this educational seminar to the community as well as to its associates in social work, counseling, and medical professions. All are welcome.