Blog
You are here: Home1 / Blog2 / General Information3 / One on One with Mayor Quinton Lucas 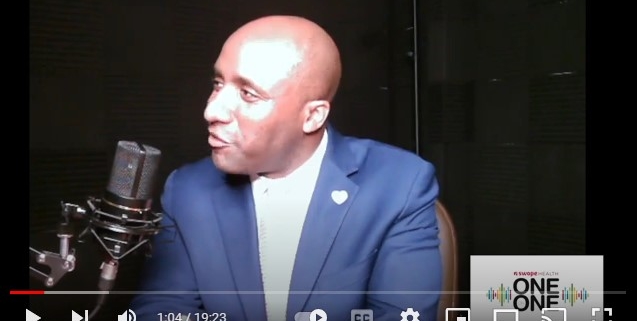 Swope Health announces a new edition of its podcast, One on One with Swope Health, featuring Mayor Quinton Lucas.

Eric Wesson, managing editor and publisher of The Call, hosts the show’s conversations with Kansas Citians about issues of importance to the community’s health and wellbeing.

In this episode, you can learn a bit about Mayor Q’s experiences growing up in Kansas City and his early sports preferences (soccer and boxing). He talks about the path to becoming Mayor and throughout, shares his values and how he tries to live his principles every day.

Born and raised in Kansas City, Mayor Q has spent most of his life in the city’s urban core. As a child, his family moved often and even experienced homelessness. Despite these challenges, Quinton remained focused on his schoolwork, earning academic scholarships to high school, college and eventually Cornell Law School before returning home to Kansas City.

In 2015, Mayor Q won a City Council seat representing Kansas City’s Third District at-Large, where he focused on bridging the gap between east and west in an economically and racially divided city.

Mayor Lucas serves as chairman of the United States Conference of Mayors Criminal and Social Justice Committee and co-chair of Everytown for Gun Safety’s Mayors Against Illegal Guns, where he advocates for local, state, and federal policy change to build safer communities.

Mayor Q is also a local and national leader in public transportation advocacy. The year he was elected, Mayor Q led Kansas City in launching an innovative Zero Fair Transit initiative, making Kansas City the first major American city to make all public transportation fare-free. Mayor Q serves as co-chair of Accelerator for America, a “do tank” focused on connecting municipalities with federal infrastructure resources to drive transformative change in communities across our country, and previously served as Vice Chair for Transit on the United States Conference of Mayors Transportation Committee.