Larry H. of Independence had struggled with health issues for years. He had bad teeth and a damaged immune system, which led to his retirement. When a friend recommended Swope Health, he thought he’d try it for dental care.

He couldn’t have predicted the journey that followed.

In April, he sought dental care but learned he had high blood pressure that needed treatment first. While receiving care for high blood pressure, his provider did a routine screening for Hepatitis C based on his age. Baby boomers (born between 1945 – 1965) make up about 75 percent of those positive for the virus. Larry learned he also had Hepatitis C.

Hepatitis C is a viral infection that causes liver inflammation, sometimes leading to serious liver damage and long-term health problems including liver cancer. There are an estimated 2.4 million people living with Hepatitis C, according to the Centers for Disease Control and Prevention. Many people may have Hep C and not know they are infected, as they may not have symptoms. 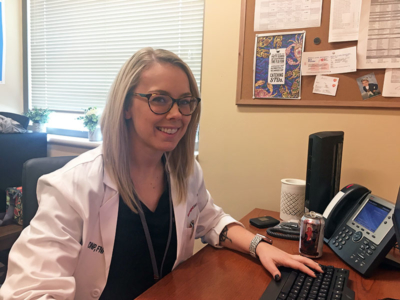 Rachel Melson, Nurse Practitioner, in the Outreach Clinic at Swope Health. She is the champion of a pilot program that assists patients with Hep C get treatment.

Enter Rachel Melson, DNP, Nurse Practitioner and Director of Outreach Clinic at Swope Health. When Larry was referred to Dr. Melson, she determined he would benefit from a new Hep C treatment. The only barrier was the cost – roughly $74,000 for a 12-week course of treatment.

Dr. Melson went to bat for him. She petitioned the drug manufacturer and secured the treatment for him at no cost.

Larry was part of Swope Health’s Pilot Program for treatment of Hep C. Traditionally, patients required a referral to a specialist outside of Swope Health to receive treatment. For most, this created additional obstacles to their treatment, such as transportation, and the financial requirements of the outside agency. The Hep C Treatment Program was launched in Spring 2019 to provide treatment for hundreds of identified patients, many who have been referred but still had not gone to receive treatment for various reasons.

Dr. Melson led Swope Health efforts to establish an effective primary-care Hep C treatment program. Swope Health is committed to developing specialized services for patients and delivering these services on site – no need for additional transportation or financial considerations. Now patients can be screened, tested and treated for Hep C all on-site at Swope Health. Dr. Melson performs an evaluation including blood test to determine whether a patient requires treatment by a specialist. Unless a patient is too sick for treatment by a primary care provider – for example, if cirrhosis is present or if the patient has had an organ transplant – Dr. Melson will manage their treatment.

Since March, Dr. Melson’s Hep C Clinic at Swope Health has seen more than 100 patients. She leads a team that works closely with patients as a champion to help them get the medication they need and follow their treatment plan.

What Does “Cured” Mean? 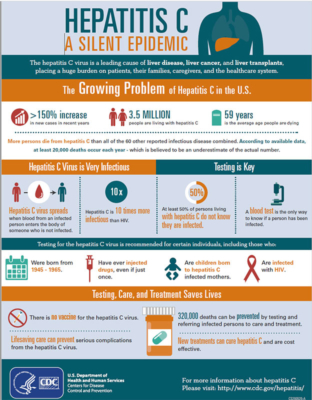 “I am already able to say that we’ve cured patients, and we rarely get to use the word ‘cure’ in medicine,” she said. “But this is such an effective treatment that we have actually been able to cure Hepatitis C.”

In this case, “cured” means the patient has no active Hep C virus in the body three months after finishing the medication.

“This service gives us another way to connect with and help take care our patients,” she said. “I love being able to develop that trust and a stronger rapport with patients through education about their health including Hep C. The more we build that relationship, the more we can care for them in the way that they need.”

Larry said he appreciates what Dr. Melson has done for him.

“Rachel is a very good doctor and a very sweet person,” he said. “There are a lot of doctors who could learn a lot from her. Not just her smarts, but her mannerisms, her way of being people to people. She’s very caring.”

Now Larry is completing his last few weeks on the antiviral drug and looking forward to the end-of-treatment blood test.

“I’m feeling pretty good now,” Larry said. “I’d recommend Swope Health to anyone. And I have.”

Do you have questions about Hepatitis C? We encourage you to talk with your provider. Call 816-923-5800 to schedule an appointment at Swope Health.