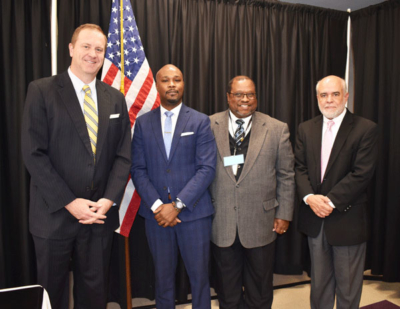 The discussion, held at Swope Health Central, was part of the Attorney General’s listening tour to better understand what is working – and what is needed. The attorney general is gathering the information in advance of an expected settlement from lawsuits against opioid manufacturers who are alleged to have misled doctors and patients about the highly addictive nature of their drugs.

Missouri joined other states in lawsuits against Cardinal Health, McKesson, AmerisourceBergen, Johnson & Johnson and Teva, as well as other pharmaceutical companies. In October, a settlement framework was announced, which could lead to millions of dollars coming to Missouri in the next few years.

In his comments to the audience of more than 40 participants, the Attorney General noted that there were nearly 1,000 deaths caused by opioid related overdoses in Missouri last year.

“We want to do everything we can to help as many people as we can,” he said. 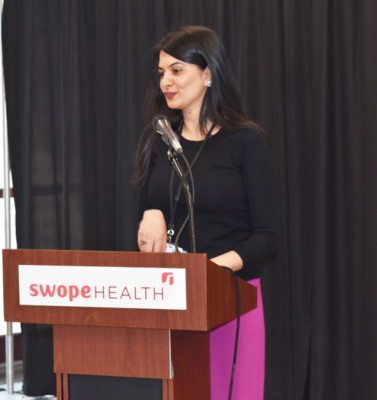 Dr. Naomi Jamal is a family physician as well as a specialist in preventive medicine and public health. She spoke about the need to provide support to the one in three families affected by opioid disorders in Missouri.

Dr. Naiomi Jamal of Swope Health spoke as a family physician as well as a specialist in preventive medicine and public health. She noted that one in three families are affected by opioid abuse, with vulnerable populations at disproportionately higher risk. Nationally, opioid addiction has killed more people than HIV at its peak in 1995.

“We have to recognize that addiction is a chronically treatable brain disease that requires medical intervention, not moral judgment,” she said.

Dr. Derek Brown, psychiatrist at Swope Health, described the Medication-Assisted Treatment program and noted how it can help break the cycle of opioid use, opioid withdrawal. He called for support taking treatment programs out into the community and for caseworkers to help provide the ancillary services – like transportation and housing – so critical to recovering patients. Andrea Buford, Director of Clinical Operations and the Swope Health Imani House, envisioned a world with services to support sober living after opioid treatment, ranging from fully staffed residential housing, to sober community group homes and individual housing with community support groups and services built in.

The Attorney General also heard from Greg Smith, speaking for Healing House Inc. and the Missouri Recovery Network; Greg Mermelstein from the Missouri State Public Defender System; as well as detectives from the Kansas City Police Department. They spoke of a need for better connections to physical and behavioral health care service, access to medications and therapy, housing support, child care, education, case workers and peer counselors to assist with the journey from addiction to recovery. 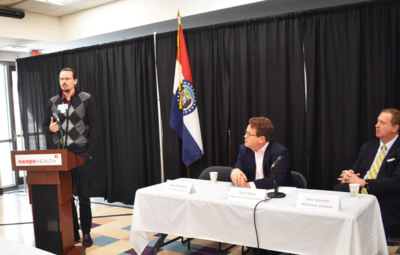 Dr. Derek Brown, a psychiatrist at Swope Health, described the Mediation-Assisted Treatment program and called for additional resources to bring programs like this out into the community.

“Far too many people in Missouri are dying from opioid disorders,” said Mark Stringer, director of the Missouri Department of Mental Health. “Addiction has been considered separately from medical care for decades, but it’s time to bring them together.”

Would you like to comment to the Attorney General? The Attorney General’s office has established a website – Real Opioid Pain – to invite Missourians to share their experiences with opioid addiction and recovery, to assist the state in pursuing litigation against manufacturers.