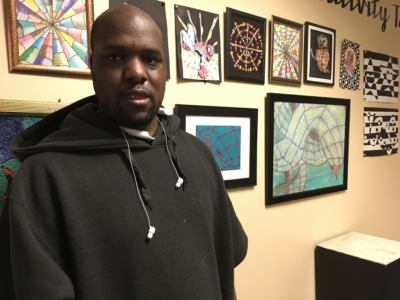 Snakes and spiders give most of us the creeps, but for Antwan Pettis, they are his inspiration and reason behind two of his passions: art and gardening. For those brave enough to come face to face with a snake, you’ll want to check out his artwork now on display as part of The Whole Person’s  9th Annual Expressions Art Exhibit.

Antwan participates in both the gardening and arts programs as part of Swope Health’s Adult Day Program. Here, he finds safe, supportive outlets for his energy, creativity and curiosity.

One of his images – a close-up illustration of the deadly puff adder snake – was recently selected by a panel of art experts to be included in the exhibit at Kansas City Young Audiences, 3732 Main St., Kansas City, MO. The exhibit showcases artists with disabilities, celebrating their abilities and unique talents.

The show adds diversity to the Kansas City arts community and introduces audiences to art that otherwise might not be presented. The ninth annual exhibit will run at various locations throughout the community through February 2020. Antwan’s art, like the others on display, is available for sale after the show ends.

In the arts program, part of the Adult Community Psychiatric Rehabilitation Program (CPRP), led by Carolyn Graves, Community Support Specialist, Antwan learned a variety of techniques for drawing and working with markers, pastels and chalk. Combining his love of snakes, spiders, insects and reptiles with his art, he found a productive way to fuel both passions – as exemplified in his work in the exhibit. 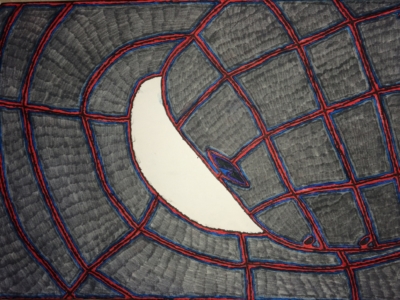 Why a puff adder?

“I think it’s a very fascinating snake because of its patterns and its dual venom,” Antwan said. “It looks just like the rocks and debris it lives in. And it is both hemotoxic and neurotoxic.” Antwan explains that the snake’s venom attacks the blood as well as the nervous system of its prey. He learned about puff adders and related snakes in school, and is quick to note that he is always learning more.

As a volunteer at Lakeside Nature Center for the last six years, he frequently works with birds of prey and wild animals. His goal is to become a reptile rehabilitator – one who works with injured reptiles.

Part of his learning process involves personal research. He enjoys visiting area woods with his friends, where they look for snakes in the wild. If he finds any, he identifies the species and its gender, he measures it and estimates its age, and takes a picture. He keeps a detailed record of his findings.

His interests in gardening also ties back to his fascination with insects and reptiles. When he learned that a friend’s rhinoceros iguana enjoys vegetables, he decided to take his share of eggplant and tomatoes from the Swope Health Day Program’s garden to the iguana.

In addition to his interest in reptiles, he also draws comic books, sometimes featuring mythological beasts like Cerberus or the Hydra.  Antwan said he always enjoyed drawing and began developing his skills in high school under the attention of a caring art teacher.

Lenise James, Community Support Specialist, notes that Antwan has exhibited artwork before, at the Creations of Hope Gallery in Topeka, part of the Valeo Behavioral Health Care Center, as well as at the Midwest Ability Summit, an expo for the metro area organizations serving people with disabilities and older adults, as well as families, caregivers and healthcare professionals. He has also exhibited and sold items at the Swope Health Holiday Mart.

You can find more examples of artwork produced by Antwan and other participants in the art program at Swope Heath Services, 3801 Blue Parkway, Kansas City, Mo., on exhibit in the main hallway of Building C.