Blog
You are here: Home1 / Blog2 / Children's Services3 / Is it Measles? One Mom’s Story 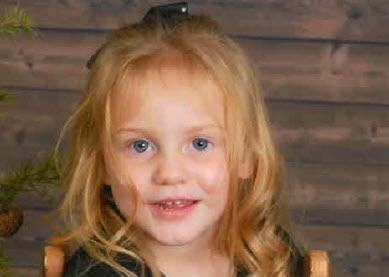 One recent Wednesday afternoon, Katie Spruell’s daughter came home from daycare with a red rash on her neck.

Katie, a Medical Assistant at Swope Health Services, examined her three-year-old daughter carefully. She found red bumps at her hairline, on her face and cheeks, down her neck and throughout the trunk of her body.

Little Gracelyn had a fever, too.

That’s when Katie began wondering if this was a case of measles.

An outbreak of measles had been reported in the Kansas City area, reaching 16 confirmed cases as of mid-April.  Most of the people who came down with measles had not been vaccinated.

Measles is highly contagious disease, producing a fever, cough, runny nose and red eyes, followed by a rash of tiny red spots. The rash typically starts at the head and spreads down the body. The disease is dangerous, especially in children, if it leads to pneumonia or swelling of the brain, according to the Centers for Disease Control and Prevention (CDC).

Katie brought her daughter to SHS the next morning, where the Pediatric team ordered initial tests for strep throat and bacterial infection. Those rapid tests came back negative, Katie said, but that didn’t answer the specific question: was it measles?

“We had Gracelyn come back three days later for a blood draw to determine if it was an atypical case of measles,” said Dr. Kenneth Thomas, SHS Pediatrician and Chief Medical Officer. He explained the test should be performed three days after of the outbreak of the rash in order to get an accurate result.

Meanwhile, during those three days, Gracelyn stayed home to prevent any spread of her illness. She was irritated, whiny and still feverish, Katie reported. Katie was worried, too, because Gracelyn had only received one vaccination against measles.

The CDC, the American Pediatric Association and most physicians recommend defending children against the disease with a combination vaccine that provides protection against measles, mumps and rubella. The vaccine takes two doses: the first at 12 to 15 months old, and the second before the child starts school, usually between age 4 and 6.

After the blood tests, the SHS providers were able to identify the cause of Gracelyn’s rash: it was a case of scarlet fever, related to strep throat.

“I was so relieved,” said Katie, noting that Gracelyn is now better.

“This illustrates how important it is for every parent to make sure your children are vaccinated,” said Dr. Thomas. “People get complacent and think it isn’t a risk anymore. But it is – the world is a much smaller place these days.”

Most outbreaks of measles are traced to unvaccinated people or those who have traveled abroad where measles is still common. The same is true of other diseases, such as polio and the flu, he noted, which is why vaccinations are necessary.

“It’s important to protect yourself and your kids from disease,” he said. “The measles vaccine is effective and safe. We would much rather prevent the disease than treat it.”

Measles spreads quickly, typically through coughing and sneezing. If you think you have been exposed to measles and have the symptoms, it’s time to see a doctor. Bring immunization records with you, and be sure to explain the reason for your visit before you arrive. This will help us protect other patients and caregivers from risk.

“If you’re not protected from measles, this is a good time to fix that,” said Dr. Thomas. “Come talk with us. Help prevent more cases of measles, and more importantly, keep your kids safe and healthy.”

Make it Bright: It’s a Great Time to Reach for Salads!
Scroll to top