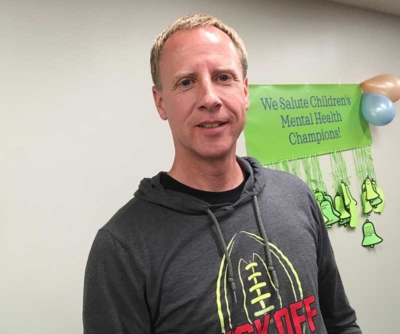 Russ Tuttle, president and founder of the Stop Trafficking Project, is also the director for “Be Alert” program, which educates and empowers students and guides adults from awareness to action. He is also leading a series of programs for healthcare workers at Swope Health.

Kansas City has a problem, but it is one you might not have heard about. Russ Tuttle wants to change that.

The problem is sex trafficking of minors. It happens when vulnerable children are exploited for sexual abuse, typically by an adult posing as a caregiver, protector or trusted friend offering acceptance or support.

Russ, president and founder of a not-for-profit organization called the Stop Trafficking Project, works every day to spread information about the issue in Kansas City. He is delivering a series of programs to caregivers at Swope Health, helping caseworkers and other healthcare professionals learn about the problem and how to intervene.

“As a healthcare provider, Swope Health is a ‘mandatory reporter’,” said Sabrina Holliman, Compliance Officer. “That means associates are obligated to report any concerns of abuse and neglect.”

“We train our associates that if they have suspicions of abuse, even if they’re not sure, it’s better to report it and do so quickly,” she said.

Associates report suspected abuse using an incident report form or calling the Human Trafficking Hotline, which coordinates with the appropriate law enforcement agency. An additional report goes to the Missouri Department of Mental Health, if the patient is under the care of the Behavioral Health department.

Swope Health also has recently added posters in all restrooms with information about human trafficking. They include important phone numbers for victims to call for help.

“We want our patients to feel safe in coming to us,” she said. “We care and we can help.”

The National Center for Missing and Exploited Children reports that at least 100,000 U.S. children are exploited in prostitution every year. According to the National Human Trafficking Hotline, 72 cases of human trafficking were reported in 2018 in Missouri, the latest report available. Of those, 53 were sex trafficking cases.

“There are sex sellers willing to sell kids because there are sex buyers for those kids,” Russ said, noting the problem may be larger than the numbers indicate. 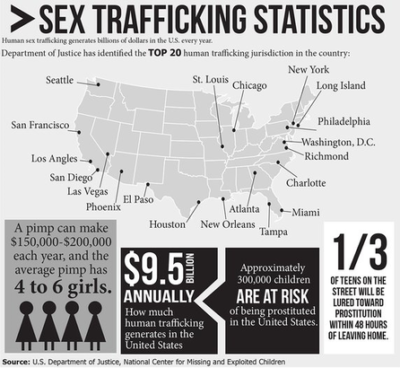 If you suspect a child is being abused, please take action:

To learn more about the issue of sex trafficking of minors:

In our next blog: Learn more about how vulnerable children are exploited by sex traffickers and what you can do to help prevent abuse.

Celebrating 50 years and more – put these events on your calendar!