Blog
You are here: Home1 / Blog2 / Adult Medicine3 / Be Like Mic: Just Do It – Get A Physical Every Year 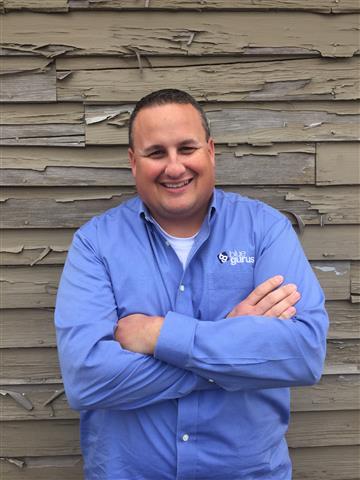 Mic Johnson has a message for you: GET A PHYSICAL EVERY YEAR.

Mic, 44, works as a website guy, blogger and LinkedIn Trainer for Blue Gurus, a 7-year old company in Kansas City.

A self-described “big guy,” Mic typically commands attention when he comes into a room. He’s usually wearing a blue shirt with his company logo, and chances are good he’s also sporting a big smile while he greets you with an outstretched hand.

You can tell he’s passionate about a lot of things, including a lesson he learned the hard way: It’s important for men to take care of themselves with an annual physical.

Mic shared a personal story about how his father Pat had a persistent cough, but never had regular checkups. His father would say, ‘oh, it’s just congestion.’ But when Mic’s grandfather encouraged Pat to finally go for a checkup, they found tumors throughout his lungs. A cancer had started in his kidneys and worked its way up to Pat’s lungs.

Pat started cancer treatment and initially improved, but after about a year, he passed away in 1995 at the age of 46.

As you might imagine, the event left a lasting impression on Mic. He was 23 at the time and it’s even more surreal as he approaches his mid-40’s.

“I knew he was young when he died, but I really know just how young as I get closer to the age he was when he passed. I’ve wondered sometimes if things would have turned out differently if he had gotten regular physicals,” Mic says. “Since he passed away, I’ve pretty much gotten a physical ever year.”

Mic points out that men, generally speaking, are supposed to be driven by logic and analysis, yet not getting an annual physical flies in the face of reason.

“It takes an hour a year to see where you’re at and what you need to do,” he said. “C’mon. If you can take just one hour a year to detect something early like cancer…or even find out things in your blood work that cause you to rethink your diet or exercise….it just makes sense.”

Mic also knows that men have an false sense of invincibility. If you don’t grow up with the habit of getting annual physicals…if it’s not a trained behavior…it’s just not something you think about.

“It wasn’t for me either,” he said. “I decided I’d do it for me, for my wife Missy and for all of the people I love. It’s simply being responsible to the loved ones in my life.”

So once a year, Mic visits his doctor — something he has done every year since his father died in 1995.

Mic encourages others to do so, too. When he has his appointment, he will make a point to check in on Facebook and use social media to generate a conversation. He knows it can motivate others to take that simple step and people have reached out to him and told him they scheduled a physical of their own thanks to his encouragement.

And each time before he leaves the doctor’s office, he makes a point to schedule the next physical…12 months out.

“That way, it’s always on the calendar,” he says. “There’s just no excuse.”

Want to be like Mic? Call SHS today for your appointment — 816-923-5800. Learn more about Mic, who supports the SHS website through Blue Gurus LLC, at his Linked In site. You can also read more about Mic’s lessons from this blog post he wrote a few years ago: February 6, 1995: The Day That Changed My Life Forever.

Why Do Men Avoid Physicals?